TLDR: We are asking for between $10,000 and $20,000 USD to incorporate Fingerprints Autoglyphs collection into the Night Run video game which will be released for free for all to play on Steam.

What Is Night Run: a conceptual art project that incorporates a night time motorcycle video game, an NFT collection about imaginary AI powered fashion houses and a video documentation series providing a behind the scenes view of the creative process. 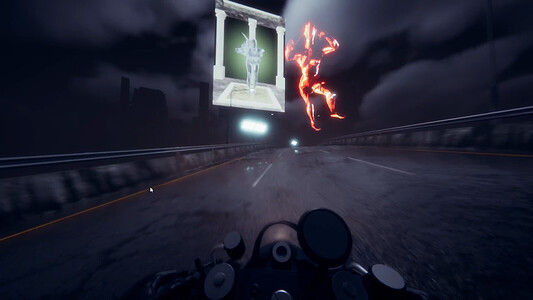 Showcase the fingerprints DAO AutoGlyphs collection in a new and interesting way:

Timeline: The timeline for the feature development is 4-6 weeks from the funding date. The video will be delivered two weeks after the feature is complete. Both will be “built in public” via the Thousand Ant and Fingerprints Discords (if desired).

What will the video look and feel like?: The video will include a mixture of on camera footage of Matto talking, footage of the game and graphics. There are examples of other devlog videos in the series here (see Google doc above for link, removed by forum)

The Team: Thousand Ant is a digital agency with a focus on realtime 3D and game development. We work with organizations like Unity Technologies, Google, Microsoft, Terraforms by Mathcastles and JuiceboxDAO to help them create games, animations and educational content to inspire developers and creators.

Matto (aka Matt Schell) is the Managing Director of Thousand Ant and a generative artist working with code, realtime visuals and procedural audio. He’s released music for respected labels like Warp Records and also formerly served as the global head of online evangelism for Unity Technologies. He is a community contributor to web3 projects including Terraforms by Mathcastles. Thousand Ant has recently released our own first two NFT collections: Hypercastle Explorers, a project which is building a game engine SDK for Terraforms and The Idea Becomes A Machine, an AI mediated exploration of the work of Sol LeWitt with robots from the future.

Suspicious Seaweed (aka Tom Schell) is the Head of Operations for Thousand Ant.

So just off the top, I saw this idea in the Cryptoadz Discord and was in favor of it for toadz. I see this as a find and replace version of the one provided to them here:

Kind of less of a fan of the idea for toadz having seen this pitch as well. I would ask to know who else has gotten this pitch and how do their use case(s) differ from Fingerprints? I understand game dev isn’t cheap nor is the potential for eyeballs but the additional cost of adding new art might not warrant the entry price.

It’s worth discussing - that what may work for toadz may not work for FP:

hey @f1cken thanks for taking a look at the proposal.

We’ve approached Nouns, Toadz and now Fingerprints with proposals. We’re approaching projects and organizations we admire and think would fit well with the project. As of now we haven’t received a commitment from anyone, but if we do we can come back and update this thread in case that changes anyone’s thinking about it.

As to whether it’s the right fit for Fingerprints, I think it’s a novel way to bring attention to the collection and potentially reach a new audience but it’s of course up to the DAO as to whether it’s in line with their goals or the right audience/context.

I had spoken to Sam Spike about this project last year when he was part of the curatorial team at FP and he had expressed interest in working together on the project, although that didn’t end up moving ahead. I hope it doesn’t seem like we’re just randomly approaching organizations. I’ve been a Jims holder since mint, am active in Terraforms which I know the DAO has a substantial collection of and have a lot of respect for Fingerprints as a collecting body.

Thanks for clearing it up! Just something that I think is probably worth mentioning at the top. Definitely know you to be a community member (JM).

Thanks for this proposal @Matto . It’s great to have a fellow Jim coming to Fingerprints with new ideas and doing really innovative stuff!

Echoing @f1cken’s comment, I’m not quite sure how Fingerprints benefits from the same “spreading the meme” kind of brand exposure Toadz or Nouns benefit.

There are levels of understanding required to:
(1) see an Autoglyph in the game
(2) understand what it is
(3) and eventually link to the Fingerprints

that I just don’t see how that will be effective in this format to create brand value for the DAO. In general our brand needs a little more explanation than other projects that are just looking to spread the meme or their aesthetics.

Thanks for taking a look at this. Understood if it doesn’t feel like exactly the right fit, a few Fingerprints adjacent folks have been supportive and interested in the project so I thought it would be worth reaching out with a proposal. Appreciate your taking time to consider it and sharing your thoughts.